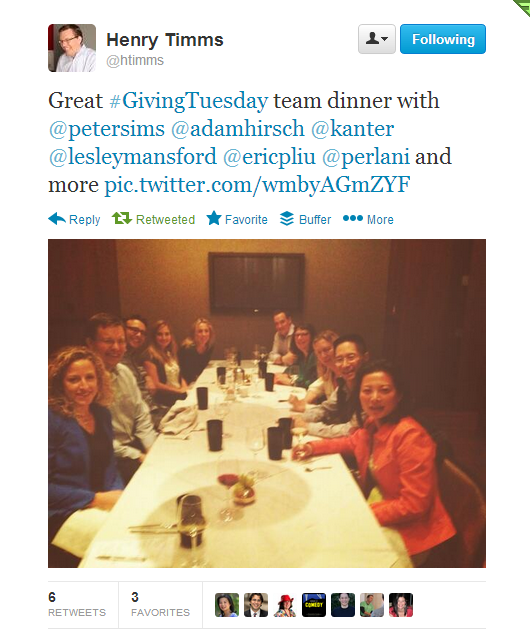 With this year’s GivingTuesday less than a month away, there’s lots of tips and best practices on how to leverage social media during the giving season both online and offline.  Last night,  Razoo, the social fundraising platform that is hosting a giving competition as part of Giving Tuesday hosted an event for SF nonprofits.   After the event, a small group of ambassadors for Giving Tuesday met with Henry Timms who asked for our feedback and shared some wonderful stories about how this year’s giving day will be bigger and better than ever.   For example, this year several cities, like Baltimore, are launching city-wide campaigns.
Leaving the dinner, I checked my Twitter feed and started seeing tweets like this one from my colleague, Tal Frankfurt. Conan O’Brien was talking about me?

Oh, he was joking about my red hat? What?

I asked my Twitter friends exactly what he said. As best as I can tell, he was complaining that he wasn’t a LinkedIn Influencer and that I had more followers on him on LinkedIn and that maybe to get influence he should have a photo of himself in a red hat and shared a couple of examples.

@kanter @ConanOBrien he was looking at your LinkedIn profile and added hats to his profile based on yours.
— Tal Frankfurt (@cloud4good) November 8, 2013

@kanter he was talking about how you have more LinkedIn followers than him. And about your hat. 🙂 @ConanOBrien
— Karianne Stinson (@Karianne) November 8, 2013

Hate to be a snitch @kanter , but @ConanOBrien griped on his show that you are a LinkedIn influencer & he is not.(Mocked your hat)
— cathy nidoski (@deltacopywriter) November 8, 2013

And looking through the Twitter stream, Conan is trying to increase his social media influence. Here’s the video clip of the segment, it’s actually pretty hilarious.

But I think Conan is going about this all wrong!
While I didn’t intend it as a strategy, what I discovered is that doing online fundraisers over the past 8 years on social channels and helping others helps you gain influence.  I think Conan should stop mocking my red hat on his show, stop asking his fans to RT his tweets, and join the #GivingTuesday movement.
He should do a monologue about charity giving on GivingTuesday on his show leading up to the December 3rd event. I’d like to him camp out early at a nonprofit’s door on that Tuesday morning so he could be the first or simply encourage his fans and followers to give to nonprofits on December 3rd. He’d gain even more influence!