Over the years,  I’ve attended events where a representatives from Facebook shared with nonprofits how to use the platform more effectively.   During the Q/A after the presentation, one of the most frequent questions asked has been, “Will Facebook be making grants to nonprofits?”   The answer is always something along the lines of “We are giving the platform to nonprofits to use for free.”       Earlier this week, in line with that CSR strategy, Facebook announced that it was rolling out a “Donate Button,”  a feature that would allow Facebook users to make a donation to a nonprofit from the brand page and in posts that shared in the newsfeed.    The reaction from the nonprofit tech community was “This is huge!” 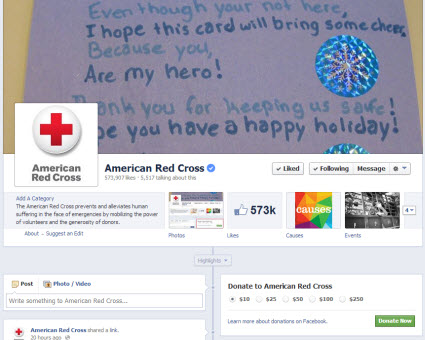 The feature is available to a group of 19 nonprofit partners who are part of beta release.   These are large nonprofits like Red Cross.   Nonprofit organizations interested in this feature can apply by submitting a simple interest form through Facebook.
Yesterday,  I shared the “Good, Bad, and Ugly” about the Facebook Donate button and the discussion was prompted further insights that I’m capturing here.
The Good
The feature makes it easy for people to donate to nonprofits.   It’s frictionless donations.   As my colleague, Farra Trompeter from Big Duck points out, there is huge potential:

This move by Facebook builds on its Gifts program from last year, which never really seemed to take off beyond the initial nonprofit partners, and its more recent push to encourage Facebook users to support the Red Cross’ Typhoon Haiyan relief efforts. When studies like the Nonprofit Social Networking Benchmark Report findthat the majority of nonprofits have raised less than $10,000 through social media, this news seems like it could make a big difference.

The other good news is that Facebook is not taking out a fee for processing donations and 100% of the donation will go to the nonprofit.
The Bad
While the donate button could be a great tool for organizations like the Red Cross in times of disaster to capture donations from those who may not normally give and feel compelled to do so,  it could encourage more transactional relationship building from nonprofits with their audiences.     Many of my colleagues, like Allyson Kapin, share this concern because the Facebook user experience is not focused on donation conversions:

There is a lot of design and user experience strategy that goes into raising money online. That’s why nonprofits spend a lot of time and resources on designing donation pages that focus on conversion rates. While it’s nice to see Facebook being charitable, having a little Donate button mixed in with all of their other features vying for users attention will negatively impact conversion rates.

Donations are not a priority for Facebook. What is a priority for Facebook is Wall Street, ad revenue, and paid partnerships. Facebook’s cluttered design has never been a good user experience, but nonprofits have muddled through it. After spending a few years building a community, now nonprofits are experiencing a decrease in organic reach as Facebook changes its algorithm to focus on paid content. Perhaps, in the future, Facebook will offer nonprofits paid options to better highlight the Donate button. However, the poor donation user experience still remains a large issue.

It might also encourage nonprofits to ask for donations without working on engagement or community building first as Debra Askanase points out.
But there is even more bad, as Farra Trompeter points out:

The Ugly
For many nonprofits, they lack the ad budget or have not built up their community or network, and many fear their will their posts be on the top of the newsfeed, thus silencing their voice.  Newsfeeds could become so cluttered with donation asks that people learn to ignore it, similar to what people do with online ads.
Facebook Should Give Ad Grants
The donate button is the not gift that nonprofits had on their holiday wish lists.  While adding the donation button to the newsfeed for nonprofits makes Facebook appear to be giving back, what nonprofits really need is a Facebook Ad Grant program similar to what Google offers.  It’s in-kind grant of advertising dollars.    Here’s more on why it is important to nonprofits.     As a member of the nonprofit technology community, we’d like Facebook to know what nonprofits would find really useful – and that’s Ad Grants program.     So, please sign the petition now. 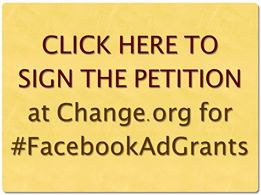 Many of us who work with nonprofits on technology, like my colleague John Haydon, agree that nonprofits need a Facebook Ad Grant program much more than a donation button.
What do you think?