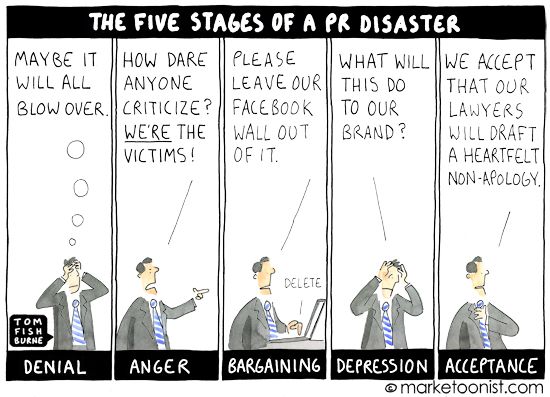 Update: Just as I hit the publish button on this post,   I got news that Komen’s Karen Handel resigned.  Perhaps the sixth stage is fire the staff person who was primarily responsible for the mess.
Now that we’ve had a few days to let the dust settle from the Komen-Planned Parenthood firestorm, it is time to think about takeaways for other nonprofits.    Deanna Zandt presents an analysis of what made this particular pr crisis different from others and the teachable moments that are useful other nonprofits.   The bottom line is:    In this set us free world of social media and virtual protests,  nonprofits need to have a crisis management strategy ready to go and be nimble with responses.
Deanna reminds us that for those under attack need to have built up their network before they needed it.    See, there’s a pay off for that “soft” relationship building and engagement tactics that are the everyday work of social media managers.      So, if the crowd is chasing your organization’s brand with a radioactive meat cleaver, Deanna reminds us:

Mack Collier, in his post,  Social Media Crisis Management 101,  also talks about the importance of a quick response and the right response.  He points out any delay in responding gives people who are upset more time to voice their displeasure with the brand and spread it to other people online, quickly and in creative ways.    This focuses attention on the problem and makes it worse.     A swift response, that is the right response can diffuse it. It requires actively monitoring and tracking on social media channels and catching those early warning signs.  (Even if you are a small nonprofit with limited resources you are immune.  There are  free tools you can use like Google Alerts that send you an alert within minutes of people making negative comments.  See Carie Lewis’s guest post on the NTEN blog for more tools and tips.)
I remember back in 2009, Carie Lewis was able to help her organization, the Humane Society of the United States, avert a PR crisis when Michael Vick announced he was going to work with them.      They picked up his statement in a google alert.  In addition, Carie was monitoring the negative comments on Facebook, took these back to the organization, and they were able to provide a rapid response, including this blog post from their CEO, Wayne Pacelle.
Both Mack Collier and Carie Lewis have some great advice for responding to angry comments.
The cartoon came from this blog post by Tom Fisburne.   As he points out in the post,  most brands will not have to deal with an epic PR crisis like what we witnessed this week, but all brands need to be prepared.   He suggests that organizations need to spend some time thinking about how they would handle a crisis, large or small.  He acknowledges that you can’t plan for every single thing that could go wrong, but you should establish ground rules that allow for rapid response and the right response.     This should be part of the social media policy as well as your organization’s communications strategy.
What is your nonprofit doing to be prepared for social media PR crisis or perhaps just on a smaller scale responding to negative comments?