Note from Beth: Over the last year, I’ve been facilitating a peer learning network of community foundations, grantees of the Knight Foundation, that are hosting Giving Days throughout the year.    Participants are learning and sharing best practices.   Several community foundations will be  part of Give Local America, a campaign that encourages and supports local philanthropy and the 100th anniversary of community foundations in the US and the vital role they play.   The campaign is organized by Kimbia and you can get a good overview with this infographic.

These community foundations are bringing nonprofits and individuals together to participate in a community-wide giving day.  In the next 24 hours, over 7,000 nonprofits will share the work of their organizations, attract new donors, raise money for their programs, and have a lot of fun doing it.     This guest post highlights some of the techniques Knight Foundation grantees are using to attract attention.  This post was cross-posted on the Knight Foundation blog here.

Getting People Excited About Giving Days by Guest Post by Marika Lynch
How do you get attention for a 24-hour online Giving Day campaign?
Dozens of community foundations across the country are wrestling with that topic this week, as they  prepare to rally residents to give locally as part of May 6’s#GiveLocalAmerica campaign.
Over the past year, Knight Foundation has helped 19 foundations organize Giving Days in their hometowns, offering tips through the Giving Day Playbook, a Peer Learning Networkfor exchanging ideas and by providing matching funds for their events.
Prepping is key, as is getting the word out. Here are three ways the foundations we work with has reached out ahead of their big days this week:

Make-a-Meme Contest: The Centre Foundation in State College, Pa., launched a meme contest, encouraging their nonprofit partners to create one to promote their Giving Day campaign. Most, like this one, were full of humor.
With 23 nonprofits participating, the contest reached more than 5,000 people, raised the profile for the foundation’s campaign and produced content for their nonprofit partners. In the end, the cats won: the Orphaned Kitten Program took home the $100 prize after receiving 126 likes.
Creating incentives to give: In Silicon Valley, the community foundation is offering an enticing incentive for donors. The first 10 to contribute $5,000 or more as part of Silicon Valley Gives will get to test drive a Tesla for two hours, followed by lunch at an upscale restaurant. What’s better than that? Maybe a complimentary software upgrade for your nonprofit, courtesy of Microsoft. The nonprofit with an annual budget over $2 million that raises the most money during the event will get the upgrade plus tech assistance and training. 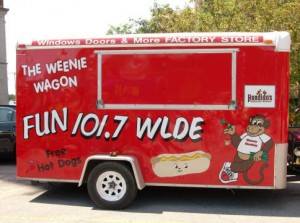 Mixing Online and Offline: Several foundations have hosted their nonprofit partners for pre- Giving Day events to help them get excited. Others are planning in-person community events for the day-of: In Fort Wayne, Ind., for example, the Fun 101.7 Weenie Wagon will be giving out hot dogs from the foundation’s parking lot.
Best of luck to everyone launching or participating in a Giving Day this week!
If you’re interested in learning more about Giving Days, check out GivingDayPlaybook.org.

Marika Lynch is a communications consultant for Knight Foundation.