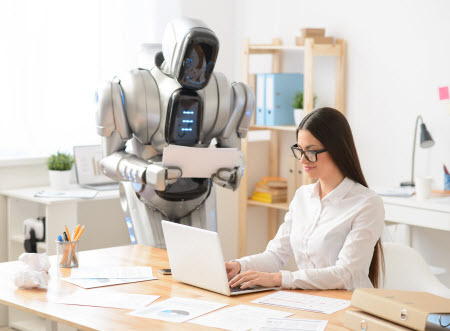 Allison Fine and I have been collaborating on research and writing about the next wave of disruptive technologies (AI, Bots, and Robots) and what it means for the nonprofit sector.  We have a couple of opportunities coming up for you to join the discussion.  On March 29th, we’ll be doing a FREE webinar hosted by Cloud4Good called “The 4th Industrial Revolution: Artificial Intelligence, Bots, and Your Nonprofit.”  If you are attending NTEN’s Nonprofit Technology Conference in New Orleans, we’ll also be leading a featured session “The Age of Automation: Bots, AI, and the Struggle for Humanity.”

The Age of Automation has arrived. It is an array of technology that includes: robots, chat bots, artificial intelligence, machine learning, conversational interfaces, smart devices, drones, self-driving cars and others which are increasingly becoming the interface between organizations and humans.  These technologies have been in development for decades starting with a group of academics who got together to build artificial intelligence, a machine that would mimic the intelligence of a human. These technologies are increasingly becoming part of our daily lives and will continue to have significant impact on our work and lives.
Bots and other technologies can add huge value to our personal and professional lives by completing basic tasks for us and freeing up our time for other pursuits. Bots can help nonprofits do more with less staff and time.
In fact, some of the new technologies can do tasks that surpass human capacity.  For example, artificial intelligence can do a facial recognition analysis of hundreds and thousands of photos in minutes. (That technology is already here and is used on Facebook to tag photos of people). Recently, a robot designed to flip burgers for a fast food restaurant had to be reprogrammed because humans could not keep up with its pace.
There is also a dark side, popularized by evil robot science fiction books, movies, and television shows.    It goes something like this: Evil robots programmed by AI gets smarter than its human creators and takes over the world.  And while that is a remote possibility now, experts are concerned that robots/bots programmed with AI will be able to learn in ways that we cannot completely understand (or be able to control the actions that result from that learning.) (More about that scary scenario here)
But, there are also concerns that need to be considered now, including ethical issues and loss of jobs to robots.   Experts predict that robots and bots could eliminate human jobs  or parts of those jobs that are repetitive in the next five years in many industry sectors.
Let’s take a look at a few examples:

Given that nonprofits are so under-resourced, replacing interns with bots might be provide a big boost in productivity for some. But it requires careful thought. As automation begins to change nonprofit workplaces,  it doesn’t mean that boards can should slash staffing costs in favor of automation. Instead, it is important to consider how to channel human knowledge.  The question to ask is: “How do we make the most of all of that knowledge, experience and expertise, even if the mechanical aspects of their work have gone away?”

Is your nonprofit using bots to do staff tasks? Is your nonprofit thinking about using bots?   Come join me for FREE webinar hosted by Cloud4Good with Allison Fine called “The 4th Industrial Revolution: Artificial Intelligence, Bots, and Your Nonprofit.”  If you are attending NTEN’s Nonprofit Technology Conference in New Orleans, we’ll also be leading a featured session “The Age of Automation: Bots, AI, and the Struggle for Humanity.”