That’s one of my favorite photos from Beirut, taken in March, 2011 during E-Mediat Train-the-Trainers intensive workshop that kicked off the 18-month capacity building project for NGOs in the Arab World about using social media to realize civil society goals.     I’m sitting next to my colleague, Lena, a master trainer from Yemen – engaging in a some shoulder to shoulder learning.
I started work on the  E-Mediat project over a year ago.  It is  sponsored by MEPI, US  Department of State’s Middle East Partnership Initiative and as part of Civil Society 2.0.  The project is being managed by IIE and builds on a highly successful program launched in the Middle East five years ago,Women in Technology.   The project is training 300 NGOs in Jordan, Lebanon, Tunisia, Morocco, and other Arab countries  to become networked ngos and use social media for civil society goals.    A true public/private partnership,  the funding partners include Microsoft and craiglist Charitable Fund.
My role over the past year been in the areas of:  program design,  design and delivery of a train the trainers intensive workshop in-country last March (see posts #1, #2, #3; #4); and develop and support the target NGO curriculum (intensive strategic and skills based curriculum).  The curriculum is based on the ideas in the Networked Nonprofit and includes social media strategy development as well as practical skills training.  The final phase is to design and facilitate in-country bootcamps with participants.  (I’ll be Jordan and Morocco in March, 2011) Today, I had the pleasure of doing a little planning for March, 2012 bootcamps in country with the strategic social media adviser from Jordan, Rami Al-Karmi (more about Rami here) and Heather Ramsey at IIE in San Francisco as well as Craig Newmark and Barry Newstead from Wikimedia.     Stay tuned …
Video and Storytelling
View more documents from E-Mediat

Over the past year,  I’ve developed curriculum for 11 days of instruction in networked approaches, social media strategy, and practical skills delivered in five workshop modules.    Each module had a trainer’s guide and materials that was provided to the training teams in each country who customized the material — translated into French or Arabic and localized case studies.    Each country team communicated with each other through an online site where the trainers shared lessons learned and ideas.   The bootcamps will be an opportunity for the ngos they trained to meet and share knowledge.
The project was lucky enough to receive a donation from Cisco of FLIP cameras and I think the most fun I had creating curriculum was the one above on storytelling and making simple and effective content for NGOs.
I’ve culling through different videos and blog posts from the in-country teams – and it is so exciting to their learning products on online and hear about some of their success stories.  I’d like to share some of these below.

The E-Mediat team in Jordan created this wonderful thank you video to Cisco as part of mastering their video storytelling skills. 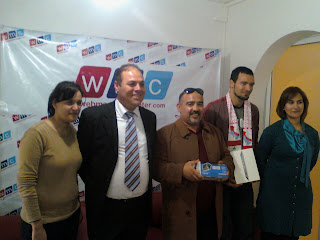 In Tunisia, E-Mediat Participating NGO “Association of Journalist of Kairouan” won the 2nd prize of the best political video by Web Manager Center, which is one of the most famous Tunisian online Magazine !
You can read more about it on the Tunisia Team’s blog.
This year during Ramadan, Tunisia Telecom launched an initiative to support 14 charity organizations.   Essmaani, one of 60 NGOs participating in the E-mediat program in Tunisia, was one of the 14 selected and received 27965 thousand dinars ($19,050.00).   Essmaani’s mission is to support to poor hospitalized families who are in need of financial and emotional support. They also recruit and train volunteers to help to carry out their mission and support hospital patients.  Tunisie Telecom learned about Esmaani thanks to their effective Facebook page and selected the organization based on the importance of their charity work in Tunisian society.  The Facebook page was developed during one of the E-Mediat training workshops,  along their social media strategic plan.  Through the E-Mediat program, Essmaani participants also gained tools on how to recruit volunteers on line and how to promote their activities using social media.


In Morocco,  the team has been sharing case studies about how NGOs have put the lessons in the workshop into practice.   The video above tells the story about how Moroccan NGOS Defeat corruption and convey their message through social media tools.

The team in Lebanon has also shared success stories on its blog about the NGOs participating in its program. The program leader, Nada Samia Hamzeh was invited to present about the program at the Arab Women Summit in Morocco earlier this month.
It is great to see the results of a lot of hard work by everyone involved and looking forward to 2012 which will be an intensive year of designing, delivering, and reflecting on capacity building in networked approaches and social media skills outside of the US.