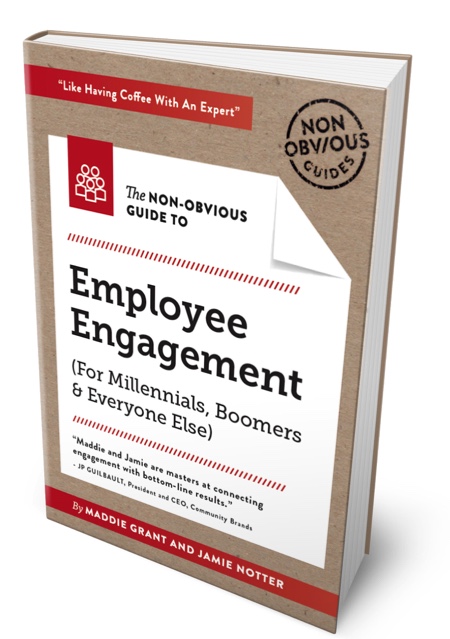 Note from Beth: In my own work on activating a culture of wellbeing, employee engagement is a key component to success. My colleagues, Maddie Grant and Jamie Notter, have just published a new book, “The Non-Obvious Guide to Employee Engagement (For Millennials, Boomers, and Everyone Else) which provides a wealth of practical information and strategies.

The Surprising Secret to Improving Employee Engagement – Guest Post by Maddie Grant & Jamie Notter
For nearly two decades, the Gallup corporation has been measuring employee engagement, and the numbers have been pretty pathetic. Back in 2000, only 30% of employees were considered “highly engaged,” and eighteen years later, after spending literally billions of dollars on engagement surveys, we only managed to increase that number to 34%. Two-thirds of our workforce is less than fully engaged, and at the rate we’re going, we’ll need more than 300 years to reach 100% engagement.
So, why are we spinning our wheels? That was the question Maddie Grant and I attempted to answer in our latest book, The Non-Obvious Guide to Employee Engagement (For Millennials, Boomers, and Everyone Else). Based on our research and experience with clients, we came to the realization that the reason we’re not making progress is that we have been trying to solve the WRONG problem all this time. We have been assuming that engagement is rooted in happiness and job satisfaction, thus our surveys and action plans focus on improving happiness, and we hope engagement will follow. The truth is engagement and happiness are two different things, and (perhaps more importantly)—they aren’t even that related.
The key insight that we’ve been missing is that engagement if fundamentally a function of success, not happiness. When you create an environment where everyone can be successful—and that includes personal success, success within their job role, and contributing to the success of the enterprise—then you will have very high employee engagement. Note that this goes way beyond simply having an inspirational mission that your employees believe in. Success, as we’re defining it, is much deeper than that.
And when you start interfering with employee success, you will also start to lose engagement. For example, if your employees can’t get the resources they need to be successful, or key people in other departments are simply horrible at collaborating, or red tape gets in the way of serving the stakeholders, then your people will feel like they are spinning their wheels and engagement will drop.
And while those engagement surveys mean well, they end up being distracting us with data on people’s likes and dislikes, rather than identifying the underlying patterns that are generating the dissatisfaction in the first place—patterns that lie deep inside your workplace culture. Those culture patterns are the missing link here, and until you can find and fix the culture patterns that are interfering with success, engagement will not improve.
The good news is, those culture patterns are fixable. We worked with a nonprofit that was so focused on including everyone, they didn’t realize that having everyone at every meeting meant they had become very slow. Their stakeholders noticed—complaining that they used to be kept ahead of the curve by the nonprofit, but were now falling behind. To fix that, they became much more rigorous about their decision making processes, which meant excluding some people from some meetings, and as a result they picked their speed back up. In other words, they started to be more successful, and as their success grew, so did their employee engagement (and retention).
The sooner you abandon your attempts to make your people happy and focus instead on making them successful, the sooner you’ll be able to start unlocking the potential of a fully engaged workforce. 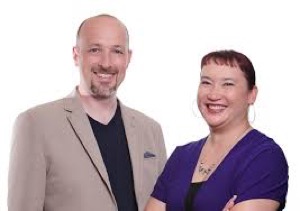 Maddie Grant and Jamie Notter are the Co-Authors of “The Non-Obvious Guide to Employee Engagement (For Millennials, Boomers, and Everyone Else).