Yesterday, I participated in two seemingly unrelated events that generated that question.    Fitbit and fitness/health apps offer many benefits — they help us become more aware of our healthy habits by measuring and producing data. The social component of the apps, sharing data with friends and competitions helps us sustain behavior change.   On a systems level, the aggregated data can help public health researchers gain more insights about healthy behaviors.    But what if the steps and calories we were tracking were also linked to environmental impact data – and it helped us motivate us to change our habits – so we were not only more healthy, but the planet too.
The first event I attended (remotely via a live stream) was hosted by The Atlantic Health Forum.  I specifically tuned in to hear editor Steve Clemons interview James Park, Chief Executive Officer and Co-Founder, Fitbit.  Clemons is a Fitbit fanatic, even getting 3,000 steps in an airplane, a fitbit obsession even surpassing that of David Sedaris.
Park was inspired to create the Fitbit in 2006 after he waited in line at a Best Buy to purchase a Wii.    He wanted to create the experience of combining activity/exercise with gaming, but make it a portable.      He and his co-founder did a Kickstarter and were surprised to get 2,000 backers right away.   His Fitbit (pictured above) tracks his heart rate – and that wristband, you can’t buy – it was custom designed by his enigneers.
Fitbit is now a global product, in 50 countries and 50,000 stores across the world.    It is gaining popularity in the Middle East where people are walking indoor malls.   Awareness and motivation to get healthier and a growing epidemic of heart disease and diabetes are behind the update of the fitbit.    The Fitbit (and other wearable health devices) are being embraced by workplace wellness programs.  According to Park and FitBit aggregated data, employees are 40% more active when wearing the devices and the activity has a direct link to reducing health insurance costs in workplaces.
I tweeted a question about the impact of the social proofing on people’s behavior – and Park answered it remotely.    He mentioned that when you add friends to your Fitbit and use the challenges, you typically average 1,000 more steps per day per friend – up to 7 friends.   Crowdsourced motivation is when you use the social components of health and fitness apps to keep you motivated on reaching your goals. 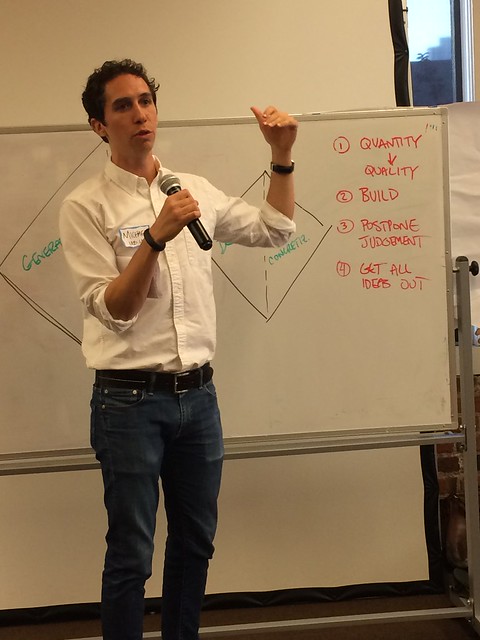 Last evening, I attended an innovation lab or “idea jam” hosted by Greenpeace Innovation Labs and expertly facilitated by Michael Silberman.  The campaign directors from around the world has converged in San Francisco for an annual staff retreat.   They organized the lab and invited technology thinkers from companies and nonprofit technology luminaries such as Gunner from Aspiration. 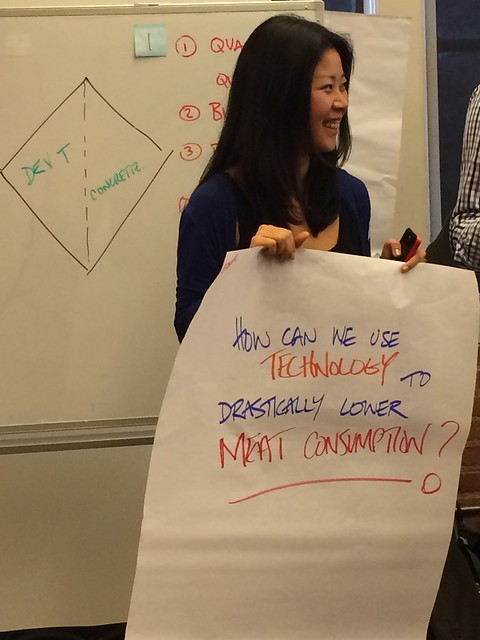 After a welcome by US Director Annie Leonard, the mini-innovation lab started off with each of the 6 campaign directors offering an overview of a campaign they were thinking about and a brainstorming question. 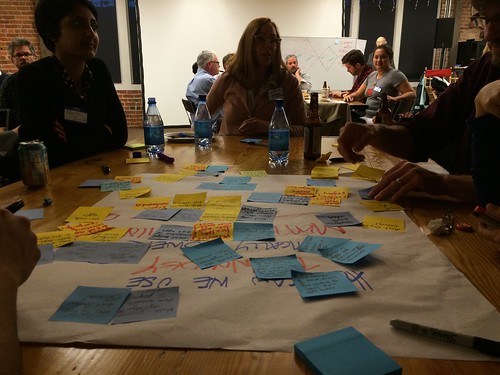 We worked in small groups, brainstorming ideas on environmentally friendly sticky notes, evaluating them, and fleshing out a few.    The question that attracted me was “How can we use technology to drastically reduce the consumption of meat?”    While I am a “cautious” meat eater, I only eat chicken, fish, and the rare grass-fed beef burger, I was not aware of the environmental impact of eating a burger. 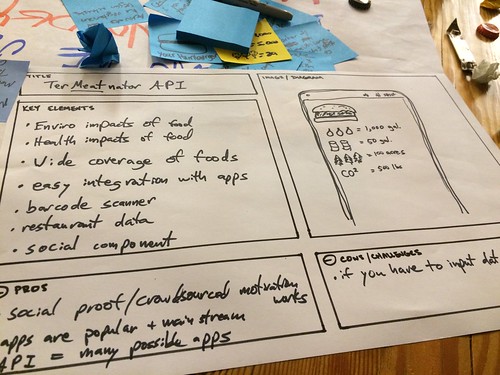 Our group came up with a bunch of good ideas and fleshed a few.   We came up with the an idea about creating an API or data base that linked environmental impacts of eating certain foods – that could be integrated into health and fitness apps.   That is if you ate a hamburger, you would not only see the amount of protein and fat, but also the impact on water, forests, Co2, etc.     Or perhaps this could be part of a campaign, similar to what Fitbit did with Feeding America where Fitbit users agreed to burn calories that would equal the amount of a meal for hungry families.
All in all, an inspiring day and evening.