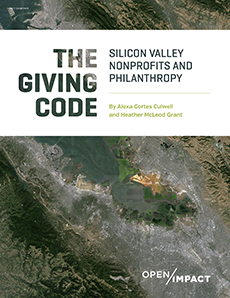 Creating Healthy Nonprofits in Silicon Valley
Guest Post By Heather McLeod Grant
Why are Silicon Valley community-based nonprofits struggling to meet demand, and having a hard time maintaining their organizational health? Why aren’t more local philanthropists directing their dollars toward these organizations? And how might we help bring these two groups together to create healthier nonprofits, healthier networks, and ultimately, healthier communities?
These are some of the questions that Alexa Cortes Culwell and I set out to answer in our new report, The Giving Code: Silicon Valley Nonprofits and Philanthropy. Funded by the David and Lucile Packard Foundation, it reflects a year of research and analysis, including conversations with 300+ community stakeholders. Our findings have relevance not just for Silicon Valley, but for nonprofits and philanthropists around the country seeking to address widening disconnects between donors and grantees, and gaps between the rich and poor.
The Giving Code examines the health of our region’s nonprofit and philanthropy sectors—their size and shape, how they operate, and where they do or do not intersect. What we learned is surprising. On the one hand, huge personal wealth is being created in Silicon Valley, and much of it is being allocated for philanthropy. But paradoxically, many local community-based nonprofits aren’t healthy: they’re unable to meet rising demand, pay escalating rents, or compete for top talent, and they are struggling financially. Ultimately, our report highlights widening disparities in our region—and points the way to potential solutions. We encourage you to read the full report or executive summary here; full citations are available for all data.
Here are some of our more provocative findings:

Bridging the Gaps
This widening gulf between the working poor and the wealthy—and between local nonprofits and philanthropists—is not unique to Silicon Valley. Across the United States, citizens are seeing the fabric of their communities eroded by the imbalances that come when the cost of living outpaces growth in jobs, real wages, and incomes. The recent election proved that rising income inequality and structural economic shifts are the critical issues of our time. We would argue that Silicon Valley has a unique opportunity to change how these dynamics play out, to disrupt the social breakdowns that occur from extreme imbalances, to break the old economic model and build a new one. We think it begins in part by inspiring a new kind of conversation and coordination among local nonprofits and the region’s active and growing philanthropic community. In the report we highlight some emerging solutions—and we are now working on cultivating more.
Ultimately, we hope that you’ll read The Giving Code, and come to the same conclusion that we have: that Silicon Valley is poised to become a region of vibrant nonprofits and committed philanthropists—along with business and government leaders—empowered to work in more connected ways to address the challenges we face in here and around the globe. We’d welcome your feedback about how you see these dynamics playing out here, and in your own community. 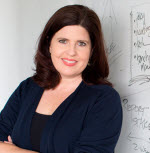 Heather is the co-founder of Open Impact and a social entrepreneur, author, and consultant with 25 years of experience in social change. She is coauthor of the bestselling Forces for Good: The Six Practices of High-Impact Nonprofits, named a Top Ten Book of the Year by The Economist, and numerous case studies, articles and other publications.