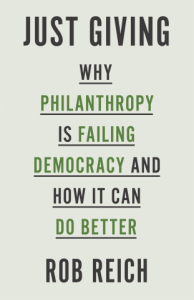 Rob Reich, Professor of Political Science, Stanford University Center for Ethics in Society, Center on Philanthropy & Civil Society, has just released a new book called “Just Giving: Why Philanthropy is Failing Democracy and How It Can Do Better.” The book is a big milestone, a delivery of almost twenty years of research, teaching, and inquiry into the ethical, political, and economic dimensions of philanthropy.
His book offers a rich historical context of everyday giving by people like you and me  as well as “Big Money” giving by billionaires. He makes his thesis, arguments, and proposed solutions with data and entertaining storytelling.
I have been following Rob Reich’s research and work for sometime now.  I first heard him speak in September, 2012, at the Stanford Nonprofit Institute where he shared some of his research and ideas on the social sector economy. He also shared the concept proposal and strategy for the first GivingTuesday as one solution to create philanthropic pluralism.