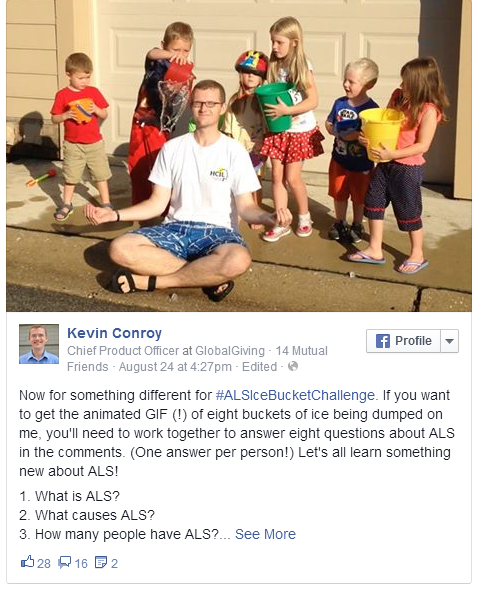 The San Francisco Gay Men’s Chorus challenged other Gay Choruses around the country!
Paull Young from charity:water donated to ALS, but used the opportunity to talk about charity:water and the importance of clean water and his birthday campaign in September.
Getting Asked By Your Board for An Ice Bucket Challenge?
Almost every development professional I spoken with in the last week or so has told me they have been asked for an ice bucket challenge by a board member or their boss.    So, if you are looking for some good reads, I suggest these articles:
1. Ritu Sharma: Can Your Nonprofit Catch Lightening in A Bucket
2. John Haydon:  3 Big Fundraising Lessons from Ice Bucket Challenge
3. Nonprofit Marketing Guide:  Creating Your Nonprofit’s Ice Bucket Challenge
Summary
As you can see, some aspects of the Ice Bucket Challenge can’t be replicated.   Most likely, no matter how your nonprofit incorporates some of the best practices, you probably won’t raise $80 million and get hundreds of celebrities to participate on their own.   As my colleague, Geoff Livingston notes, “For every BatKid and Ice Bucket Challenge, there are hundreds of failures.’     But you can certainly incorporate some of the best practices like social proofing, fun call to action, and embracing free agents to get better results.