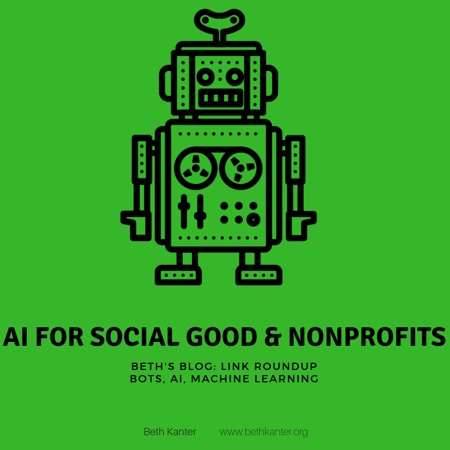 Allison Fine and I have been actively researching and writing about AI for Social Good and Nonprofits. Most recently, we co-authored a policy brief for the Toda Peace Institute on artificial intelligence and its implications for civil society.
We are tracking reports, articles, and new items about AI and Social Good. Here’s this month’s roundup.
People’s Guide to AI:  This comprehensive beginner’s guide to understanding AI and other data-driven tech explains AI-based technologies so that everyone—from youth to seniors, and from non-techies to experts—has the chance to think critically about what the technology can do.  The mission of A People’s Guide to AI is to open up conversation around AI by demystifying, situating, and shifting the narrative about what types of use cases AI can have for everyday people. It is funded by Open Society Foundations.
State of AI in 2018 Report: The AI NOW Institute, which is affiliated with New York University and is home to respected AI researchers with Google and Microsoft, released a report describing the state of AI in 2018 that highlights some worrying trends. AI is developing faster than our regulatory system is prepared to handle and threatens to consolidate power in the tech companies and oppressive governments that deploy AI while making society vulnerable to AI biases, surveillance, and other dysfunctions. AI Now Institute Co-Founder, Kate Crawford, shared the top line trends as a thread on Twitter. She was also interviewed on the City Arts and Lectures podcast recently and well worth a listen.
AI and the Future of Humans: The Pew Research Center and Elon University’s Imagining the Internet Center interviewed experts about their predictions about the impact of AI. Will people be better off in 2030? Concerns about human agency, evolution and survival emerged as well as proposed solutions can be found in the full report.
AI for Social Good: The McKinsey company recently released its “AI and Social Good Report,” which includes a landscape analysis of how AI is currently being used to solve big hairy problems. The report notes that while AI is not a silver bullet or cure-all, the technology’s powerful capabilities could be harnessed and added to the mix of approaches to address some of the biggest challenges of our time, from hunger and disease to climate change and disaster relief.
AI and Faith: Can a computer become God? Or, more to the point, could humans invent AI that can convincingly impersonate God — and if so, would humans bother to worship it? On December 8, 2018, Seattle Pacific University, AI and Faith, and TheoTech hosted an unconference to explore the relationship between AI and faith. They discussed more pragmatic than philosophical questions, particularly the ethical implications of AI.
How To Teach Artificial Intelligence More Common Sense: Deep learning is the king of AI. In six years, it has become the dominant way to help machines sense and perceive the world around them. It powers Alexa’s speech recognition, Waymo’s self-driving cars, Google’s on-the-fly translations, and more. However, some experts argue that deep learning will not produce generalized intelligence, because truly human like intelligence isn’t just pattern recognition it must include common sense. If AI can mimic more human intelligence, it will be safer and more useful.  Wired Article by Clive Thompson.