Click for Twitter Transcript
Last week, I had the honor of participating on a keynote panel at Celgene Corporation’s Patient Partners annual meeting ahead of the ASCO Conference (ASCO is a professional oncology society committed to conquering cancer through research, education, prevention and delivery of high-quality patient care).   The panel included Stefani Klaskow, Head of Industry/Healthcare at Google; Carrie Martin Munk, Chief Communications & Marketing Office, The ALS Association, and Jackie Fouse, Ph.d, President, Global Hematology and Oncology, Celgene.   The panel was moderated by Joel Beetsch, Vice President, Patient Advocacy, Celgene and Cara Thompson, Director of Patient Advocacy was the host for the event. 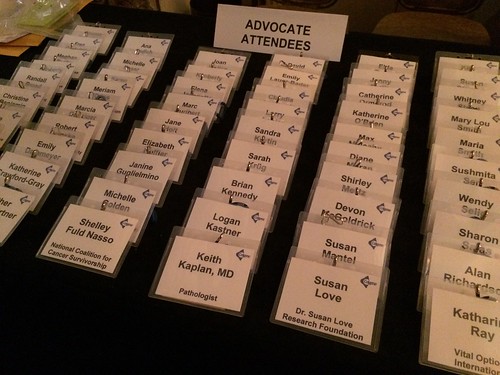 The audience consisted of patient and professional patient advocacy organizations that were attending the ASCO meeting.  The session included an update of Celgene’s work in patient advocacy and an announcement of their Innovation Impact Awards Program, focused on incorporating the patient voice into pharmaceutical and biotech research and development. Patient advocates play a critical role in setting research priorities, designing clinical trials and structuring appropriate clinical engagement with industry.

Celgene’s has five focus areas that guide its work and that our talks and discussion touched on many of these themes.   This post summarizes some of the insights related to the effective use of networks and data in healthcare information and patient advocacy.
Stefani Klaskow, Head of Industry,  Health Care at Google

Stefani gave an overview of health care technology trends and some projects that Google is working on.   I learned a new word: “Cybercondria” or the unfounded anxiety concerning the state of one’s health brought on by visiting health and medical websites.  When you go online to find medical information, you find information that falls into one of three categories: scientific, practical/useful, or “snake oil.”
Many consumers may find it difficult to find the useful and accessible information — and when you consider that there are 30 billion health related google searches a year, it can be a challenge not to get overwhelmed or go down the wrong path.   Stefani noted that in their research they know that people typically search on Google with a general term and then type in a more specific term to get to the information they need.  For example, they might search for the word “headache,” not find what they’re looking for and use a string specific terms like “sinus headache with pain between nose and ears.”
To address this issue, she mentioned that Google has a partnership with the Mayo Clinic to create a “knowledge panel,” which includes Mayo Clinic writing clinical summaries written at 6th grade reading level for common health searches.   This “Dr. Google” project has been described by some as a disruption of medical information.   Some are describing this shift in perspective as “participatory medicine” or “person-centric care.”
Stefani pointed out there are important trends that are impacting healthcare information online.   The technology itself, especially devices trackers like fitbit and the apps that are being developing for health care from tracking your calories, stress level as well as apps that help with keeping your medication on track.    She mentioned that 50% of Americans say they have changed their health behavior based on using a tracking device or app.  (I know that wearing a fitbit has helped me personally become more active.)
Mobile health apps have grown in popularity.  For example, in the short time the Apple Watch has launched – out of the 244 apps available there are 15 health focused apps, not just fitness.  There is more to come.
She also gave an example of young patient activist, Sara Ringer, who has a passion for spreading awareness and accurate information about Crohn’s disease and ulcerative colitis.  She was one of the first patients to use video blogging through her nationally recognized YouTube channel to share her story and educate people about life with IBD. 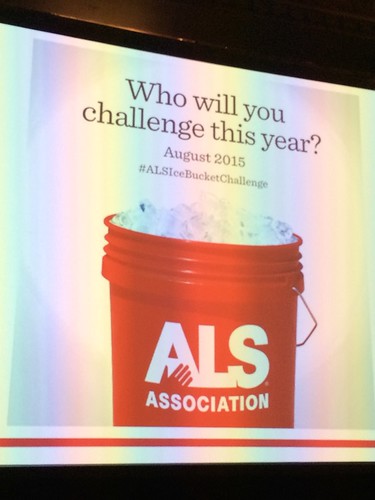 Carrie Martin Munk, The ALS Association
Carrie started off with a recap of what happened during the IceBucket Challenge and how much was raised.  It got started in upstate NY by Pat Quinn and through social networks, it spread to Pete Frates.  During the first week in August, 200 people gathered in Copley Square and Pete Frates turned on his social media machine.   The ALS Association found itself in the middle of a campaign they didn’t start.  A campaign that raised awareness and donations for ALS to epic proportions.   For example,  ALS had 51% more engagement 84% unique engagement on Facebook than the Super Bowl, typically an event that creates the most activity on Facebook.
Carrie came to ALS from the Red Cross, so she brought all her crisis and disaster communications management skills and knowledge to the Ice Bucket Challenge as the campaign went viral and the donations came flooding in.   “It felt like when I managed communications at the Red Cross during Hurricane Katrina.”   And while she used the term “crisis communications,”  she said it was a good crisis.
She mentioned that one of the big lessons was that while social media was taking fundraising and awareness of ALS to new heights, traditional media and crisis communications was important to keep the momentum going.     The ALS Association received thousands of emails with questions like “How do I take the Challenge?” to “Can I donate if I don’t dump water on my head.”  They redirected all staff from current work to staff the effort.  The work included daily updates to the press and web site about how much was raised, addressing questions, and correcting false perceptions about slacktivists.
There was a shift in the way they work, they had to be more transparent, with everyday fundraisers reports on numbers and people who were doing the challenge.  There was also a focus on clear and consistent internal communications, providing daily talking points to chapters, scanning social media for potential crisis issues that came up and needed a fast response.   Carrie quoted Churchill, “A lie gets half-way around the world before the truth gets its pants on.”
They have developed a plan to make decisions on how to spend the money.  It focuses on supporting research, advocacy, and care services, with a focus on re-energizing the research community to find a cure.
They had four collaborative research projects, ideas were there but money not before the Icebucket Challenge.   The number of  applications for ALS research has tripled.  They are increasing grants to certified centers and chapters are investing more in local needs, caregiver programs and access to assisted technology.
They are also facing a marketing challenge to combat the perception that they have all the money they need.
The Ice Bucket Challenge has had a significant and lasting ripple effect on finding a drug for a cure, but also for the Association’s fundraising.    Last December, I interviewed the ALS CEO, Barb Newhouse, and learned that the average age of donors got younger and that 600,000 donors checked the box that they’d like to hear from the ALS Association.  There has been a ripple effect on their annual fund campaign, with a significant increase the pre IceBucket numbers.  As Carrie said, “We are adjusting to the new normal.”
Of course, there is the 64 Million Dollar Question or should I say 113 Million Dollar Question- will there be another ALS Icebucket Challenge?   Pat Quinn, advocate who started it, said, “It has to happen every August.”     And as Carrie asked, “Who will you challenge this year?”