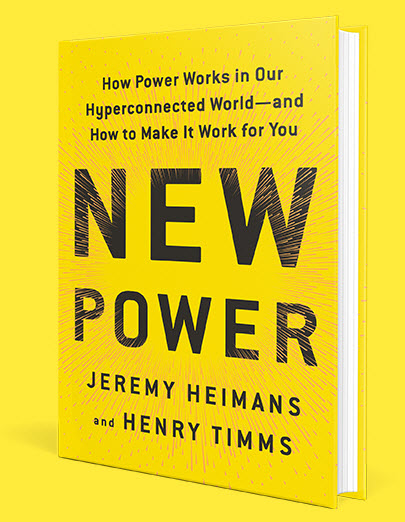 Back in November, 2014, Henry Timms and Jeremy Heimans published an article about “New Power” in the Harvard Business Review that caught my eye.  The concepts around connectivity and leadership were synergistic with the concept of networked leadership that Allison Fine and I wrote about in the Networked Nonprofit, published in several years before.
The article caught fire – not only in nonprofit and philanthropy circles – but also business, government, and beyond. Today, after several years of researching and writing, Timms and Heimans have finally published their book called “New Power: How Movements Build, Businesses Thrive, and Ideas Catch Fire in Our Hyperconnected World.” It is a sector must read.
The book is a guide about how to navigate and thrive in a connected world that has been increasingly been influenced and increasingly defined by two different forces, old and new power.  Here is how Timms and Heimans define these terms:

As we have seen over the last decade, with the power of connectivity comes the opportunity for people with similar interests to come together and organize themselves in ways that transform geographic boundaries. Connectivity helps facilitate highly distributed groups of people to work on a campaign, project, or share ideas that spread with unprecedented velocity and reach. We also seen how organizations can harness connectivity as well as movements. This way of working requires a different, more participatory leadership model and mindset that Allison Fine and I first wrote about in The Networked Nonprofit and others have written about called “networked leadership.”
And, as we’ve seen in the past year and especially in the few last weeks, new power can be harnessed for evil just as it can for good. New power is behind some of the most impactful movements (and business models) of the decade.  This includes social good movements like #metoo, #marchforourlives, #icebucketchallenge #givingtuesday and others. The book suggests that those who want to reach their goals and be successful whether it is for good, bad, or the trivial, need to know how to best channel this participatory energy.
We, in the social good sector, especially need to keep honing our skills in unleashing new power for good causes.  As Henry Timms says, “Will the voices of reason be drowned out by extremists of all kinds? Will the platforms we are all addicted to truly make us more powerful, or will they simply be participation farms? These are key questions of our times.
The book is filled with stories of people and organizations that have more recently harnessed new power, both well-known examples like the Pope and lesser-known examples too.  It also analyzes the skills – which are often misunderstand as the ability to use the social network platforms like Facebook. It encompass mindset and ways of working which can be used to exercise new power despite whatever platform or tool is available to us.
The books answers many questions that are useful to nonprofits in their quest to spread and harness social good.  Here’s a sampling of just a few:

New power is not just a passing trend, it matters for civil society.  Connectivity and platforms like Facebook can bring us closer together and inspire amazing work or they can be weaponized to drive us further apart as we’ve been witnessing over the past 18 months. Here and now, it might feel less like the utopia that tech leaders envisioned a decade ago, especially when platforms like Facebook can harvest our data and that of 2 billion users for their own gain and the highest bidder. We are also seeing that our hopes for toppling dictators are diminishing because the authoritarian leaders are mastering new power techniques.
One of my favorite chapters of the book describes different leadership profiles based on the values and leadership approaches that different leaders use.  Each profile is illustrated with an in-depth case study.  It goes like this:

As Henry Timms says, “More than ever it is becoming clear that new power – the ability to harness the energy of the connected crowd – is the essential skill of the 21st century. In an age of participation, those who mobilize best will win. We need this on the side of the angels – non profit leaders, academics, journalists – to master the methods and mindsets of new power.”
If you are a leader of a nonprofit, this book, New Power is an absolute must-read.